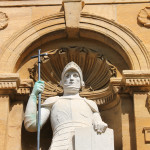 The War Memorial was designed by the prominent architect, Charles Edward Bateman, and created by local stonemasons, Bridgeman and Sons of Lichfield. Carved from Guiting stone, with the central figure of St George sculpted in Portland stone, the memorial is the focal point of the garden.

Lower panels were later added to the war memorial, which were dedicated to those who had died in the Second World War and later struggles.

A sundial stands in the middle of the Garden of Remembrance. 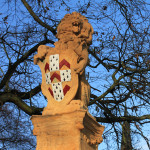 The stone lions on the gate piers reputedly came from Moxhull Hall in Warwickshire and the 18th century stone balustrades and plinth came from Shenstone Court, just outside Lichfield.