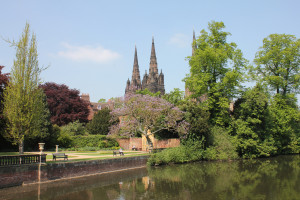 View across Minster Pool to Garden of Remembrance

In the early 1300s, a crenellated wall surrounded Cathedral Close and formed part of the cathedral’s fortifications. According to an 18th century map, the wall passed through the centre of what is now the Garden of Remembrance.

Over time, as parts of Minster Pool silted up, the area of land where the garden now stands doubled in size and by 1738 it was large enough to warrant a lease and attract rent. Through the years, it has been used for a variety of purposes, including livestock grazing.

Following the First World War, the people of Lichfield were anxious to create a memorial to those who had lost their lives. Three projects were proposed. 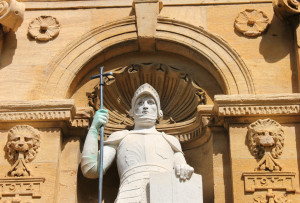 The War Memorial was designed by the prominent architect, Charles Edward Bateman, and created by local stonemasons, Bridgeman and sons of Lichfield.

Carved from Guiting stone, with the central figure of St George sculpted in Portland stone, the memorial is the focal point of the garden.

Work on laying out the garden began in 1919. The stone lions on the gate piers reputedly came from Moxhull Hall in Warwickshire and the 18th century stone balustrades and plinth came from Shenstone Court, just outside Lichfield. A ceremony of dedication was held on 20 October 1920.

Lower panels were later added to the war memorial, which were dedicated to those who had died in the Second World War and later struggles.

The Garden of Remembrance is owned and managed by Lichfield City Council.