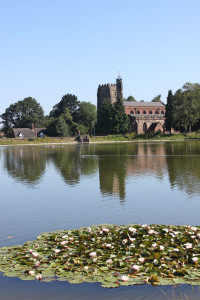 View towards the Church of St Chad

Stowe Pool along with Minster Pool and the Bishops Pool were valuable fisheries. In the 18th century the mill stream on Reeve Lane divided to flow into Stowe Pool as two streams.

A conduit carries Leomansley and Trunkfield brooks under Museum Gardens and Bird Street into Minster Pool. The water is fed into a pipe under Dam Street and Stowe Fields, and then into Stowe Pool.

Many of the fields in this area were referred to as ‘moggs’, a word peculiar to Lichfield meaning boggy ground. The ground to the south of Stowe Pool was occupied by long narrow gardens belonging to the houses on Lombard Street.

Before 1856, Stowe Pool existed as a mill pond, with Stowe Mill located to the west of St Chad’s Church.

In the 18th century, the pool was visited, among others, by Samuel Johnson and Anna Seward. On the north side of the pool, Johnson’s father owned a parchment factory, today commemorated by the street name The Parchments. Nearby stood Johnson’s Willow, an enormous tree which became famous for its great size. It was much admired by Johnson, who always visited it whenever he returned to Lichfield in later life. The current Johnson’s Willow on the site is a descendant of the original.

Stowe Pool was taken over by the South Staffordshire Waterworks Company in 1856, and was made into a reservoir. This man-made structure is around six metres higher than the original ground level.

During construction, the water company planted ornamental trees and created a new path along the top of the embankment. The boathouse was built around 1890.

Since 1968 the reservoir has not been used to supply water, and it is now solely used for recreation.

Stowe Pool provides a relaxing setting for coarse fishing, roach, perch, carp, pike and tench. Fishing permits are available from a ranger on site or by visiting the Ranger Station in Beacon Park (next to the crazy golf course).

Stowe Pool is owned and managed by Lichfield District Council.