Minster Pool is thought to predate the mediaeval times, and has been used over the centuries for defence of Lichfield Cathedral, as a fishery, power for a mill and for industry. It is home to plenty of water foul including ducks, swans, geese and gulls. 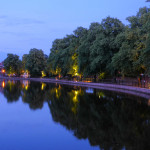 Minster Pool Walk runs alongside Minster Pool, and is lined with trees that are lit up at night. With views towards the Garden of Remembrance and the cathedral, Minster Pool Walk is a great place to find a bench and to take in the scenery.

The Remembrance Garden that lies alongside Minster Pool Walk was opened in 1955 in memory of Lichfield citizens who lost their lives during the Second World War. The land was taken from the long gardens of the houses on Market Street. 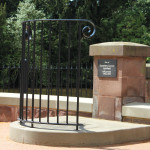 Speakers Corner Lichfield was launched in May 2009, with the help of the Speakers’ Corner Trust. Hundreds of people joined in the celebrations which featured more than 30 speeches, musical and dance performances, as well as star appearances from BBC’s Joanne Malin and ex Coronation Street star, Chris Walker.

Today, Speakers’ Corner is a site for events and activities, as well as a destination for all the community to visit and have their say on topics close to their hearts.

Since the launch, a plaque has been unveiled at the site, along with a code of conduct. The whole area was given a facelift, including laying a new stone plaque to mark the spot of Speakers’ Corner, as part of the Lichfield Historic Parks project.