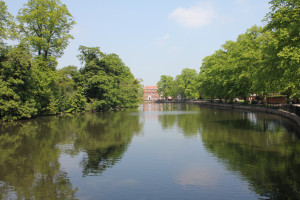 Minster Pool is fed by Leomansley and Trunkfield brooks. It is thought to have been created or extended during the 12th and 13th centuries, although evidence suggests that a body of water existed in the area from the early medieval period.

A natural pool was probably enlarged by creating a dam towards the later named Dam Street, to provide power for a mill and to create a fishpond.

At the start of the 14th century, under the orders of Bishop Walter Langton, a causeway was built on what is now Bird Street, dividing a much larger pool in two. These became known as Minster Pool to the east and Bishop’s Pool (or Upper Pool) to the west. This latter pool silted up over time and was eventually filled in to create Museum Gardens, which opened in 1859.

The remains of Langton’s bridge is still below the replacement Causeway Bridge that was built in the 1760s, and again in 1817, to allow coaches to travel across. This grade II listed bridge was created by the architect Joseph Potter (Sr), who also supervised alterations to the cathedral.

During the Civil War, in the three sieges of Lichfield Cathedral between 1643 and 1646, Minster Pool’s defensive role was tested by both Royalist and Parliamentarian forces who in turn garrisoned and besieged the cathedral.

Inspired by a visit in 1772 to The Serpentine in London’s Hyde Park, the poet Anna Seward was instrumental in landscaping Minster Pool to give it a serpentine shape and in developing New Walk, later renamed Minster Pool Walk.

The Memorial Garden was laid out in 1955 in memory of Lichfield citizens who died in the Second World War and later conflicts. The garden was created by using land from the long gardens of houses on Market Street.

Speakers’ Corner Lichfield, on Dam Street, was launched in 2009 and has been the site of lively debate, celebrations and performances ever since.