Museum Gardens was first created as an informal park in the late 1800s. With its stunning floral displays and avenues of trees, along with the centrepiece fountain and statues, it is a must-see on your visit. 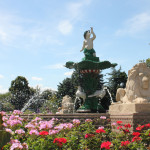 The ornamental fountain in Museum Gardens was donated by JT Law, the diocesan Chancellor in 1871. The figures of the lions round the fountain were given by Sir Richard Cooper, a city alderman in the late 1880s.

The statue of Kind Edward VII was presented in 1908 by Robert Bridgeman, Sheriff of Lichfield. It was created as a gesture of the city’s loyalty to the monarch. 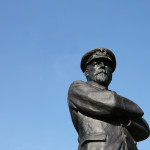 A bronze statue of Commander Edward John Smith (RD RNR), Captain of the ill-feted Titanic, which sank in 1912, stands in Museum Gardens. It was sculpted by Lady Kathleen Scott, widow of Captain Scott of the Antarctic.

Captain Smith was born in Hanley, Stoke-on,Trent. The statue was designed for Lichfield as the city is at the centre of the diocese that includes Hanley. It was also considered a convenient calling place for visitors travelling between London and Liverpool.

The statue was funded by national subscriptions and was unveiled in 1914.

Cast in bronze, the statue of Erasmus Darwin stands 7.5ft high. It was designed by local artist, Peter Walker, who worked in partnership with Erasmus Darwin House and volunteers on the project.

Lichfield District Council contributed £20,000 section 106 funding towards the statue and granted planning permission for it in 2012.

Erasmus Darwin moved to Lichfield in 1757. He was a scientist, physician, philosopher, inventor, poet, and grandfather to the world famous evolutionist, Charles Darwin. 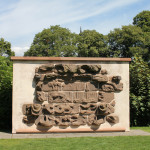 The Herbaceous Garden is packed with interesting plants that will delight the keen gardener. Martyrs’ Plaque is also displayed in this part of the park.

This 18th century plaque is the remains of a stone panel that was originally set into the facade of Lichfield’s Guildhall on Bore Street. The plaque portrays Lichfield’s gruesome seal, which is based on the legend of one-thousand Christians that were said to be defeated in a battle near Lichfield in Roman times. The seal depicts the three slain kings that led the Christians into battle.

There is a large play area next to the golf course and the boating pool. It includes lots of play equipment, including swings, a climbing wall, a basketball court and a tunnel slide. It also includes an enclosed Junior Play Area aimed at children up to 11 years of age. This fenced area has a large wooden play ship, play train, swings, a spiral maze, wooden fort, a roundabout and more. 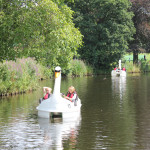 Beacon Park’s beautiful and tranquil pool offers a great place to feed the ducks (feed available at the Ranger Station) and to mess about in boats, depending on the weather!

A monument to Colonel Swinfen Broun overlooks the boating pool. It pays tribute to the local benefactor who paid for 12 acres of land to extend Beacon Park. Commissioned by Lichfield City Council, the stone with its bronze plaques was unveiled in 1972.

The woodland which is past the football pitches is a great place for a ramble. You can follow the path to a pond dipping platform, wildlife information boards, an outdoor classroom and bluebell wood. 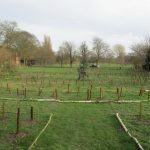 Since 2018, Lichfield Cathedral has been working in partnership with Lichfield District Council’s parks team to create a Peace Woodland in Beacon Park. It is a permanent living artwork created by Lichfield Cathedral’s artist-in-residence Peter Walker. 1,918 local trees were saved, which would otherwise have been felled and composted as part of routine parks maintenance. At the heart of the Peace Woodland is a bronze plaque with names dedicated to peace and permanently engraved. The woodland and plaque is a monument to peace marking 100 years since the end of the First World War. 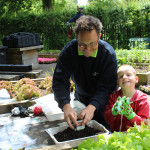 The Community Garden, which is near to the bowling greens, is a great space for green-fingered community groups. A number of local groups use the facility to have some hands-on experience of gardening.

To find out about the history of Beacon Park and how it was created over time, visit our about Beacon Park page.

Beacon Park invites you on a free audio tour to find out fascinating facts about this Lichfield Historic Park.

The self-guided audio tour includes insights on how Beacon Park was created right up to the present day. It also includes information on the park’s historical monuments, including Martyrs’ Plaque, Law’s Fountain and the statues of Captain Smith, King Edward VII and Erasmus Darwin.

To start the tour open our audio tour map and sound files.