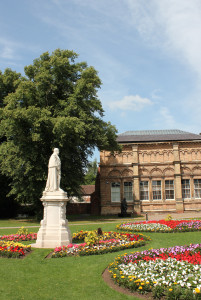 Dating back to the late 1800s, Beacon Park is set in more than 70 acres of beautiful formal gardens and open spaces.

The park underwent extensive renovation in 2010 and 2011, thanks to a multi-million pound grant from the Heritage Lottery Fund and Big Lottery Fund. The project , led by Lichfield District Council and Lichfield City Council, helped to restore many of the park’s historic features as well as to develop new facilities.

From stunning walks and fascinating wildlife, to a play area an an 18-hold par-3 golf course, Beacon Park offers something for everyone.

Museum Gardens were first created as an informal park in the late 1800s. The land was once part of Minster Pool until a causeway was built, on what is now part of Bird Street, and it became known as Bishop’s Pool (or Upper Pool). This pool silted up over time and was eventually filled in.

Museum Gardens opened as a public park in 1859,during the reign of Queen Victoria. It was developed by the City Corporation and funded by the Conduit Lands Trust.

Originally incorporating ornamental pools and avenues of trees, the gardens were designed to complement the Italianate architecture of the adjoining Free Library and Museum. 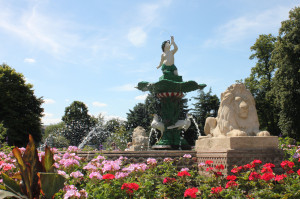 The figures of the lions round Chancellor Law’s Fountain were given by Sir Richard Cooper, a city alderman, in the late 1880s. In 1892, the Conduit Lands Trust agreed to supply water to the fountain three times a week in the summer, without charge.

Beacon Park’s Recreation Grounds were opened in 1891 on nearly 5 acres of land. The grounds were extended by 12 acres in 1943, thanks to a local benefactor, Lieutenant-Colonel Michael Swinfen Broun. The area now features tennis courts, bowling greens and football pitches.

Beacon Park, including Museum Gardens, is owned and managed by Lichfield District Council.

To find out more about what you will find at Beacon Park when you visit go to our attractions page.