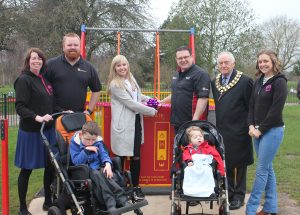 Thanks to fundraising by Lichfield Round Table, along with fundraising in memory of Isla Elizabeth Hufton, a new accessible swing has been installed in Beacon Park’s junior play area.

Lichfield Round Table started raising money in 2018 to install the new swing so that children in wheelchairs have a dedicated piece of play equipment in Lichfield’s Beacon Park. Activities included raising money at Lichfield Bower, Cars in the Park, Santa’s Sleigh and more.

Leon Jennings, from Lichfield Roundtable, said: “Lichfield Round Table were very pleased and honoured to be able to work with Steph, in memory of her daughter Isla, to not only create an area for remembrance, but also bring benefit to the local community and allow children of all abilities to play together.”

Lichfield Roundtable joined forces with Stephanie Hufton, who was also very keen to get an accessible swing launched in Beacon Park as her daughter Isla had really enjoyed her time on a similar swing.

Isla Elizabeth Hufton suffered from Mitochondrial DNA Depletion Syndrome and sadly died when she was just 18 months old. Her family and other groups and individuals have been fundraising to get an accessible swing in Beacon Park. 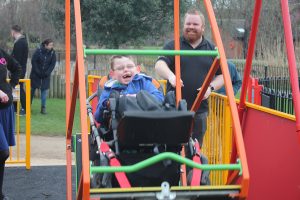 Willian being pushed on the swing by his dad

Stephanie said: “Today has been such a special day and bought back so many memories of Isla. It’s amazing to see the children enjoy the swing, their smiles were priceless and that’s what I wanted for other children to experience. In life, it’s those smiles that gets us through the tough times.

“I’d like to thank everyone who has made a contribution to the swing especially to my friends, family, Liz Capewell, work colleagues and customers at Body Beautiful Day Spa, we wouldn’t have been able to make this happen without you all. Thank you everyone.”

Lichfield District Council covered the installation costs of the swing and has welcomed the new addition to the park.

Councillor Bob Awty, Chairman of Lichfield District Council, said: “A big thank you on behalf of the whole council to all the groups and individuals, as well as the family and friends of Isla Hufton who have helped to raise the money for the swing and supported the project. It’s a brilliant new addition to the park and it is lovely to see the first two children try it out. We know that many more children will enjoy the swing over the years to come.”

The accessible swing is available for children in wheelchairs to use. It can be accessed with a radar key, which is available from Beacon Park’s Ranger Station.