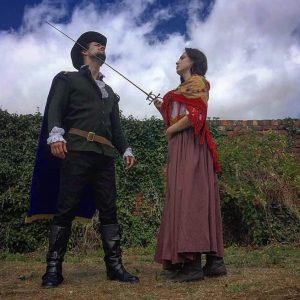 One for all and all for one!

Lichfield Proms will take place in Beacon Park on Saturday 1 September. To make the best use of the stage, Lichfield District Council has invited IKP’s production of The Three Musketeers to take place centre stage the evening before.

Following its recent successes with Three Men in a Boat, Alice in Wonderland and The Wind in the Willows, IKP is bringing its unique brand to another classic novel.

Expect swashbuckling, sword fights and subterfuge in this family-friendly adaptation of the French favourite – Alexandre Dumas’ The Three Musketeers. Five actors multi-role to create fast and furious comedy in this upbeat adaptation.

Join D’Artagnan, Athos, Porthos and Aramis as they travel the length and breadth of France saving the day, rescuing people in distress and generally being heroes.

Follow D’Artagnan in her quest to join the Musketeers in this hilarious comedy adaptation which takes the audience on a whistle-stop tour around France, and still has time for a quick trip across the Channel.

With physical comedy, fast-paced action, and a smattering of playful innuendo for the grown-ups, The Three Musketeers is an unmissable outdoor theatre treat to end the summer holidays.
This production is designed to be performed in the open-air and will continue in all safe weathers.