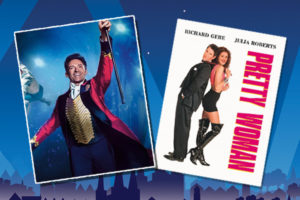 Blockbusters at Beacon Park this August

Roll up! Roll up! The all singing, all dancing spectacle, The Greatest Showman, will play at Beacon Park’s third Drive-in Movie of 2018 on Friday 10 August. It will then be followed by the romantic 90s classic, Pretty Woman, on Saturday 11 August.

Following a clash with a nearby venue for Top Gun, Lichfield District Council has changed movie titles and is now showing the hit musical, The Greatest Showman, this August instead.

It is one of two films being screened in Beacon Park later this summer, and will be followed by the modern day fairy tale, Pretty Woman on Saturday 11 August.

The movies will play on a giant screen, and cars just need to park up and tune in their car radios to hear the fantastic soundtracks.

There will be movie meals and cinema snacks on offer as well as a reserved area in front of the cars for on foot ticket holders to bring along chairs and blankets to enjoy the film outside. However, walk in tickets have already sold out for The Greatest Showman.

Councillor Iain Eadie, Cabinet Member for Leisure, said: “Beacon Park is a wonderful setting for our summer drive-ins, and we’re really excited to be showing The Greatest Showman and Pretty Woman. We expect both films to be really popular, so book as soon as you can to avoid disappointment.”

Gates will open at 12noon to allow audience members to park up and enjoy all that Beacon Park and Lichfield has to offer. The films will then start when it gets dark at around 9pm.

Tickets cost £25 a car per movie and £5 for on foot customers, with the option of hiring a headset for £3 as well as a deposit of £15 on the night.

Tickets can be booked in person at the Lichfield Garrick Box Office or over the phone by calling 01543 412121.

You can also book online, just visit our drive-in page and follow the link, where you will also find some frequently asked questions about how the drive-ins work.