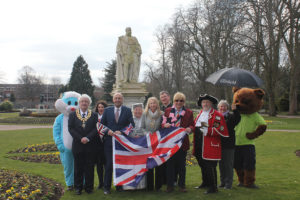 Warren and Ranger Ted with the special guests

To celebrate English Tourism Week (17 to 25 March), Visit Lichfield organised a tour of some of the city’s top tourist attractions and invited some very special guests, including Lichfield’s MP, Michael Fabricant and the Chairman of Lichfield District Council, Cllr Mark Warfield, and the Mayor of Lichfield City Council, Cllr Janice Greaves.

We were very proud that two of Lichfield’s Historic Parks, Beacon Park and The Garden of Remembrance, were included on the tour, which took place on Thursday 22 March 2018.

At Beacon Park the special guests, that included Lichfield’s Town Crier, Ken Knowles, were met by our park mascots, Warren the bunny and Ranger Ted!

It’s great to get the opportunity to raise the profile of the parks and we hope everyone enjoyed the tour!

Read more about the tour…