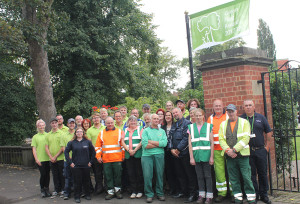 The team behind beautiful Beacon Park!

From the monuments and floral displays, to the play area and sport facilities, if you love Beacon Park vote for it to win a People’s Choice Award.

Green Flag Award launched its annual People’s Choice award on 1 September 2017, which gives the public a chance to vote for their favourite award-winning park.

Lichfield District Council is now urging local people to support Beacon Park and to vote for it to win one of the ten prestigious People’s Choice Awards.

Councillor Iain Eadie, Cabinet Member for Leisure, said: “We know that Beacon Park is a much loved local park and thousands of people enjoy all that it has to offer each year. We’re now hoping plenty of people will show their support and vote it to win a People’s Choice award. It would be fantastic to see Beacon Park win one of the top spots, especially for our parks team and our many volunteers.”

The vote will close at noon on Saturday 30 September. The ten most popular parks and green space in the UK will be announced in October.

To vote for Beacon Park as your People’s Choice winner, please visit http://www.greenflagaward.org/park-summary/?park=1453 and click on ‘Vote for this site’.

Paul Todd, International Green Flag Award manager said: “Following the huge success of #LoveParks Week, the People’s Choice Award is another chance to show how much your favourite park means to you. Make your voice heard and vote now.”

All Green Flag Award-winning sites are entered into the annual People’s Choice award vote. Last year saw tens of thousands of people voting for their favourite park, with Alexandra Palace Park in north London crowned as the People’s Choice.

Find out more at www.greenflagaward.org.