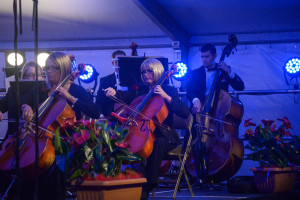 There are plenty of musical treats in store for the audience at this Saturday’s Lichfield Proms in Beacon Park.

Lichfield District Council’s free annual Lichfield Proms in Beacon Park is on Saturday 2 September. Children’s activities will start from 5.30pm, the City of Lichfield Concert Band will warm up the audience from 6pm, and The British Police Symphony Orchestra will take to the stage at 7.30pm to play the main concert.

The City of Lichfield Concert Band has a treat in store for movie lovers, as they will be playing music from Beauty and the Beast, How to Train Your Dragon, a Disneyland celebration, a James Bond medley and many more popular classics.

This will build up to the British Police Symphony Orchestra who will take to the stage at 7.30pm to lead the main concert.

The 75-piece orchestra is conducted by Richard Jenkinson, who will be joined on stage by experienced compere, Danny Mizon.

Together they will take concert-goers through the main programme on the night, which includes music from Madame Butterfly, Romeo and Juliet, Dances with Wolves, Lawrence of Arabia, Lord of the Rings, The Magnificent Seven as well as Sea Songs and more.

The evening will end with a fireworks finale and all the proms anthems, including Rule Britannia, Jerusalem and Pomp and Circumstance No 1.

Richard Jenkinson, Music Director & Conductor of the British Police Symphony Orchestra, said: “Our line-up includes something for everyone, combining popular film and TV music, with lesser known pieces that I know the audience will love. A highlight for me is the beautiful Mozart duet from The Marriage of Figaro, which featured in film, Shawshank Redemption.”

Councillor Iain Eadie, Lichfield District Council’s Cabinet Member for Leisure, said: “With top class music, picnicking under the stars in the beautiful surroundings of Beacon Park, and plenty of community cheer, our nineteenth Lichfield Proms in Beacon Park promises to be a fantastic event for the whole family.”