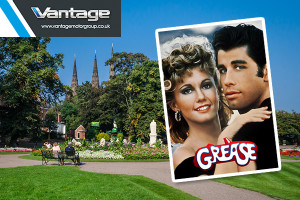 Counting down the days…

With Beacon Park’s first ever Drive-in Movie taking place this weekend, Lichfield District Council is encouraging movie-lovers to book their tickets before it’s too late.

The cult musical Grease will play on a giant inflatable screen at Beacon Park’s first Drive-in Movie on Saturday 12 August 2017.

There are still some tickets left, but time is running out to make sure you book your tickets in good time as they won’t be sold on the night.

Throughout the day and all through the event, Lakeside Bistro will be selling movie meal deals to eat in before the film or to take out, such as nachos, pizza, burgers and pulled pork along with a drink. The bistro will also be selling snacks direct to cars on the night, including doughnuts and ice creams.

An extra addition to the festivities is that a number of fairground rides will be available for adults and children over the weekend of 12 and 13 August and throughout the drive-in.

Councillor Iain Eadie, Cabinet Member Leisure, said: “We’re really excited about our first Drive-in Movie at Beacon Park. It should be a really fun way to spend an evening and we’re hoping lots of people will get into the spirit and dress up as Pink Ladies and T-Birds. There’s only a few days to go until the drive-in, so we’re reminding everyone to book their tickets for the main event.”

Gates will open at 7pm and the film will start at 9pm. Drivers simply tune in their radios to the movie soundtrack frequency to hear the film and all the classic songs.