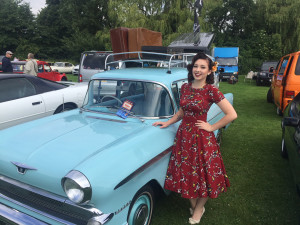 Drive-in meets Cars in the Park!

Following the success of the Rotary Club’s Cars in the Park, which took place at Beacon Park on 1 and 2 July, Lichfield District Council is urging movie lovers to snap up their tickets to the Drive-in Movie.

After selling out of tickets to the area reserved for on foot film goers, the council is reminding everyone to book their tickets to see Grease at Beacon Park’s first ever Drive-in Movie on Saturday 12 August 2017.

The cult musical will play on a giant inflatable screen, and drivers simply tune in their radios to the movie soundtrack frequency to hear the film and all the classic songs.

Councillor Iain Eadie, Cabinet Member Leisure, said: “Watching a film under the stars in the beautiful surroundings of Beacon Park is an event not to be missed. Having sold out of the on foot tickets already, we’re urging movie lovers to make sure they book their cars in within plenty of time.”

Lakeside Bistro will be selling movie snacks, such as hotdogs, popcorn and drinks, which will add to the drive-in atmosphere.

Grease will play on a big screen at Beacon Park on Saturday 12 August. Gates will open at 7pm and the film will start at 9pm.