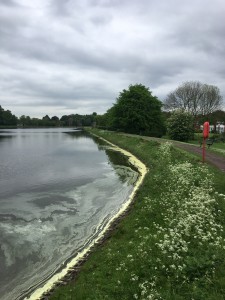 A pale yellow substance has appeared along the edge of the water in Stowe Pool on 19 May, which is believed to be pollen.

Chris Cook, Head of Leisure & Operational Services, Place and Community, said: “We’re investigating a substance that has appeared along the edge of Stowe Pool, near the boathouse.

“We’ve been in contact with the RSPCA and are now working with the Environment Agency to identify the substance and take any necessary action. At this point we are not ruling out a natural occurrence, such as a large deposit of pollen.”

The Environment Agency has now visited the site but is unsure what the substance is so are investigating further. They have checked the PH and oxygen levels in the water, which are fine so the substance doesn’t appear to be harming the natural environment.

Latest update 3.15pm on 19 May: The Environment Agency to has now confirmed that the substance is a large deposit of pollen. As it’s a natural substance, and as pH and oxygen levels in the water are normal, no further action is necessary.