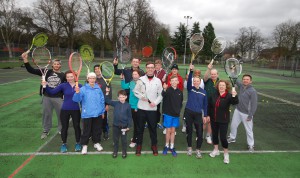 Tennis for Free at Beacon Park

In February 2016, national tennis charity Tennis For Free, in partnership with Lichfield District Council and Lichfield Friary Tennis Club, launched a new initiative in the city to inspire more to play the sport.  300 people attended the launch event and since then, the site has had on average 60 people playing tennis every week.  In total 647 people have started playing tennis for the first time at Beacon Park, which is the best attendance figure in the UK for the Tennis For Free charity.

James Graney, Beacon Park Tennis Lead Coach, said: “Through rain or shine and even some snow, we have had a youngsters and grown-ups attending every week.  We’ve had people new to tennis and some getting back into the sport. It has been a fantastic year in a wonderful setting and it has been a pleasure to help nearly 650 people play tennis for the first time.”

Tennis For Free has created a partnership with Lichfield District Council, Lichfield Friary Tennis Club and the LTA to help provide free coach led tennis sessions for all the family between 2-4pm every Sunday in Beacon Park.  Anyone from four years and over can join the free group sessions, just register at www.beaconparktennis.co.uk and turn up.

Tennis For Free CEO, Paul Jessop, said: “James and his team have done a great job nurturing the group.  The whole idea of Tennis For Free is to give people the opportunity try tennis without any barriers and help them on their journey to play this amazing sport.  To have helped nearly 650 people get into the sport is amazing but to have on average, 60 people playing every week, is testament to James’ hard work and enthusiasm.”

Councillor Andy Smith, Cabinet Member for Leisure & Parks at Lichfield District Council, said: “We’re absolutely thrilled that Tennis For Free at Beacon Park has been recognised in this way. The coach led tennis sessions are hugely popular and are helping to introduce more and more people to the sport, which has been our main aim all along. Well done to everyone involved and we hope even more people will take up the chance to try out tennis for free in Beacon Park.”

Started in 2004 and celebrating over a decade of getting over 150,000 people to hit tennis balls for free, Tennis For Free is a registered charity founded by comedian Tony Hawks with fashion executive Patrick Hollwey.  It aims to provide healthy, vibrant tennis communities on FREE public park tennis courts creating new tennis players of all ages and backgrounds, and showing that tennis can be enjoyed by all. Tennis For Free supporters include Judy Murray (Team GB’s Federation Cup Captain (the female equivalent of the David Cup) and the mother of two of Team GB’s successful Davis Cup team – Andy and Jamie), BBC tennis commentator Andrew Castle and multiple Grand Slam winner Pat Cash.

To find out how to sign up for Beacon Park’s Tennis For Free coach led sessions, visit www.beaconparktennis.co.uk