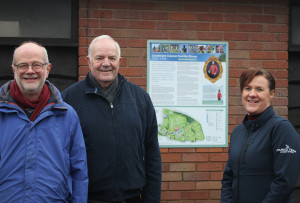 A colourful information board detailing the life and times of Colonel Swinfen Broun, was unveiled at Beacon Park in Lichfield on Tuesday 20 December 2016.

Lichfield District Council has installed a new interpretation panel next to the monument of Colonel Michael Swinfen Broun in Beacon Park.

The panel pays tribute to the man who gave many gifts to the city, including the money to pay for Beacon Park to be extended and improved in the 1940s.

The panel was put together by Lichfield District Council, with help from the Friends of Lichfield Historic Parks and the Swinfen Broun Charitable Trust.

Councillor Andy Smith, Cabinet Member for Leisure & Parks, said: “Colonel Swinfen Broun was such an important figure in Lichfield’s history. His generosity has left a lasting legacy, and it’s only right that we should honour this great man.”

The interpretation board tells the story of Michael Swinfen Broun’s birth in Scotland in 1858 before the family moved to Lichfield, his early education and career in the Staffordshire Militia, as well as his marriage to Laura Flemming, a member of the family who made its fortune from Eno’s Fruit Salts, and the birth of his daughter Elsie.

The panel describes the Colonel as a philanthropist who gave may gifts to the city during his lifetime and how he bequeathed money to the city in his will, following his death in 1948.

“It is fitting that the land Swinfen Broun’s monument stands on in Beacon Park is only here because of his generous gift to the city. We hope this panel will help tell his story to new generations and show our gratitude. Many thanks to everyone who has helped with the research and wording of the interpretation board,” continued Cllr Smith.

The council also took the opportunity to clean the Swinfen Broun monument and landscape the surrounding area.