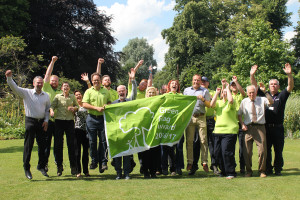 From the statues and formal gardens, to the play area and sports facilities, if you love Beacon Park vote for it to win a People’s Choice award.

Green Flag Award launched its annual People’s Choice award on 1 September 2016, which gives the public a chance to vote for their favourite award-winning park.

There is a difference this year, as it is the twentieth year of the Green Flag Award, there won’t be one overall winner, there will be a top ten voted by the public.

Lichfield District Council is now urging local people to support Beacon Park and to vote for it to win one of the ten prestigious People’s Choice awards.

Councillor Andy Smith, Cabinet Member for Leisure & Parks at Lichfield District Council, said: “Last year we were absolutely delighted to be voted the best Green Flag park across the Midlands and twelfth in the country.

“This year we’re hoping residents and visitors will once again show their love of Beacon Park and vote for us to win one of the ten awards.”

The vote will close at noon on Friday 30 September. The ten most popular parks and green space in the UK will be announced in October.

To vote for Beacon Park as your People’s Choice winner, please follow the link at www.lichfielddc.gov.uk/votebp

Paul Todd, Green Flag Award manager said: “We all have a favourite park, whether it’s our local green space or a special park we’ll travel miles to visit.

“Following another record-breaking year for the Green Flag Award, we are urging everyone to vote for their own favourite park, so we can put together a list of the ten most popular parks in the UK. It will be great to celebrate ten of the public’s favourite parks and for them to become the People’s Choice 2016.”

All Green Flag Award-winning sites are entered into the annual People’s Choice award vote. Last year saw more than 30,000 votes from the public, with Victoria Park in London’s Tower Hamlets crowned as the People’s Choice.