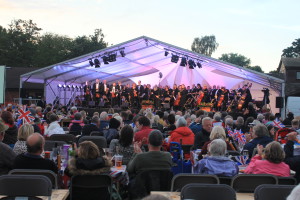 4th King’s Own Regiment of Musketeers

Thousands of people waved their Union flags and sang with gusto at this year’s Lichfield Proms in Beacon Park on Saturday 3 September.

In spite of the threat of wet weather, thousands of people flocked to the park for the eighteenth free Lichfield Proms in Beacon Park.

The sun shone through the clouds as The City of Lichfield Concert Band performed popular classics while the audience found their spaces and set up their picnics.

This led up to the main concert, which featured The British Police Symphony Orchestra, its Musical Director and Conductor Richard Jenkinson and professional singers, Claire Prewer, Richard Coxon and Aaron Prewer-Jenkinson.

The main concert was expertly compered by proms favourite, Danny Mizon who took the audience through the musical programme and entertained the crowd with his witty humour.

A highlight for the evening was a surprise re-enactment from the 4th King’s Own Regiment of Musketeers. Proving a big hit with the audience, the musketeers performed a mock battle between the French and English with musket fire in time to Beethoven’s rarely heard Battle Symphony Opus 91.

The rain held off until the fireworks finale which included everybody’s proms favourites, Rule Britannia, Jerusalem and Land of Hope and Glory.

Councillor Andy Smith, Lichfield District Council’s Cabinet Member for Leisure & Parks, said: “Lichfield Proms in Beacon Park once again pulled out all the stops and ended the summer in style. Proving the weather man wrong, the evening was a wonderful mix of stirring music, beautiful singing and fireworks in the beautiful surroundings of Beacon Park.

“Proms is a huge event to stage and I would like to thank the organisers and the parks staff and volunteers who made sure the event ran smoothly on the night. Our sincere thanks also goes to our sponsors and everyone who made a donation on the night.

“And finally, a big thank you must also go to the City of Lichfield Concert Band, The British Police Symphony Orchestra, the 4th King’s Own Regiment of Musketeers, the singers and compere, who made it such a memorable evening.”