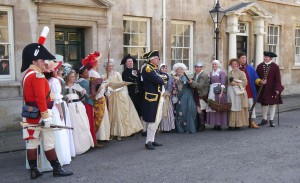 See how the Georgians lived, played and worked in the 18th century in the beautiful setting of the historic Beacon Park.

The encampment will be on display on Saturday 17 and Sunday 18 September and the costumed characters will also parade throughout the city over the weekend – so look out for them as you walk round the Georgian architecture and streets of Lichfield.

There will also be stalls selling items and gifts alongside the encampment.

The encampment is courtesy of the Black Knight Historical re-enactment group which has staged many similar events throughout the country.

The event is supported by Lichfield District Tourism Association and the Lichfield BID.

The encampment characters will also be appearing at the Georgian Fashion Show at the Guildhall on Sunday 18 September.

Beacon Park is also the best spot to see Moonlight. This is a Son et Lumiere light and sound show which pays tribute to The Lunar Society, formed 250 years ago, which was made up of many brilliant minds of the 18th century including Lichfield’s own Erasmus Darwin.

Come to Beacon Park Museum Gardens for one night only, Saturday 17 September for an 8pm start. The light show, which lasts 20 minutes, is repeated every half hour until 9.30pm. The event is free and all are welcome.

Make your own origami pot for 50p and plant seeds that Erasmus Darwin may have used during his physician duties. You can also find out about the ‘smell trail’.