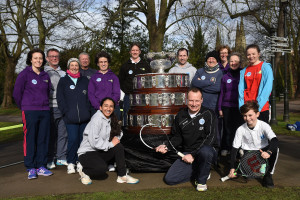 Nearly 300 people packed onto the four tennis courts and thousands saw the Davis Cup by BNP Paribas at a special event in Beacon Park on Sunday 21 February.

National tennis charity Tennis For Free, in partnership with Lichfield District Council, Lichfield Friary Tennis Club and the LTA, launched a new initiative in Lichfield to inspire more to play the sport.

To celebrate the launch of the free coaching sessions, the Davis Cup was brought to the city, which had pride of place next to the courts in Beacon Park. Queues developed as an estimated 1,000 people got up, close and personal with the famous trophy which stands three feet high and weighs 200kg.

Behind the Davis Cup nearly 300 people packed onto the tennis courts for a fun-filled two hours of tennis games, drills and coaching, beating the existing Tennis For Free launch attendance record. The previous record for an official launch was 197 at Bellfield Park in Inverness. Lichfield smashed that record with 296 children and adults, many playing tennis for the first time, plus many court-side spectators.

Councillor Andy Smith, Cabinet Member for Leisure and Parks at Lichfield District Council, said: “It was such an honour to welcome the Davis Cup to Lichfield and I’m delighted so many people took part in the first session and had the chance to see the Davis Cup. Now is a great time to be getting into tennis as, working with Tennis for Free, we have also made three of Beacon Park’s tennis courts free to play on any time after 1pm every day of the week. You don’t need to book, just come along and play.”

Tennis For Free CEO, Paul Jessop, said: “Wow. 296 people plus family and friends were crammed into the courts, a record attendance in over ten years of Tennis For Free. The atmosphere was amazing and even though we had gusts of over 40 miles an hour, the wind didn’t stop the crowds from enjoying themselves. Together with the Davis Cup on show in Beacon Park it was an amazing day which I hope will inspire people from the area to come along again and enjoy free tennis every Sunday afternoon.”

The free coach-led tennis sessions for all the family will take place between 2pm and 4pm every Sunday in Beacon Park. Anyone from four years and over can join the free group sessions and the public is being encouraged register at www.beaconparktennis.co.uk

Three Men in a Boat

Kick in The Head Productions perform their rip-roaring barrel of fun, Three Men in a Boat, with Giles Shenton (Old Herbaceous himself!) playing the part…

The Tales of Peter Rabbit and Benjamin Bunny.