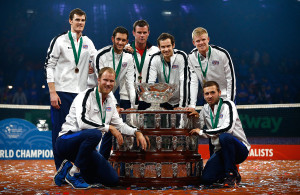 The Davis Cup by BNP Paribas is heading for Lichfield to help launch a brand new free tennis initiative on Sunday 21 February, from 2pm to 4pm.

National sports charity Tennis For Free has served up an ace for Lichfield and the surrounding area by creating a 50-week programme of free tennis lessons at the city’s tennis courts in Beacon Park.

To celebrate the launch, the Davis Cup, which was won by Team GB late last year, will be on show between 2pm and 4pm on Sunday 21 February in Beacon Park.

The charity, working in partnership with Lichfield District Council, Lichfield Friary Tennis Club and the LTA, will to help provide free coach led tennis sessions for all the family starting on Sunday 21 February between 2pm and 4pm in Beacon Park.

Anyone can join the free lessons and the public is being encouraged to visit Beacon Park for a once in a lifetime opportunity to see the Davis Cup in the city.

Councillor Andy Smith, Cabinet Member for Leisure and Parks at Lichfield District Council, said: “It is such an honour to be hosting the Davis Cup in Beacon Park and we know lots of people will jump at the chance to see this prestigious trophy. We hope plenty of people will register to take part in the free Sunday coaching and, with our tennis courts available to play on for free after 1pm each day of the week, it’s a fantastic time to get into the game.”

Tennis For Free CEO, Paul Jessop, said: “What better way to launch a year of free tennis lessons in Lichfield than to have the Davis Cup in the city. It’s a fantastic opportunity for members of the local community to get up, close and personal with the trophy, which is the size of a small car, and then have a game of tennis for free and hopefully start a wonderful journey of free tennis lessons for a year in the amazing surroundings of Beacon Park.”

Started in 2004 and celebrating over a decade of getting over 150,000 people to hit tennis balls for free, Tennis For Free is a registered charity founded by comedian Tony Hawks. It aims to provide healthy, vibrant tennis communities on free public park tennis courts creating new tennis players of all ages and backgrounds, and showing that tennis can be enjoyed by all. Tennis For Free supporters include Judy Murray (Team GB’s Federation Cup Captain (the female equivalent of the David Cup) and the mother of two of Team GB’s successful Davis Cup team – Andy and Jamie), BBC tennis commentator Andrew Castle and multiple Grand Slam winner Pat Cash.

Lichfield Friary Tennis Club professional coach, Paul Bayliss, said: “You can just turn up to have a look at the trophy but we hope you can play a game or three too, the first of many Sunday afternoons of free tennis. The Davis Cup will be available to view between 2pm and 4pm, the same time as the lessons so if you are wanting to play we’d recommend registering early via www.beaconparktennis.co.uk The British team wrote their names in history by winning the Davis Cup for the first time in 79 years. In achieving this incredible feat and becoming world champions, the people of Lichfield are fortunate enough to have this wonderful trophy to inspire them to get involved in our great game.”

The free weekly tennis coaching is for anyone aged four and above of any ability and equipment will be available to use. To take part, simply register for free at www.beaconparktennis.co.uk