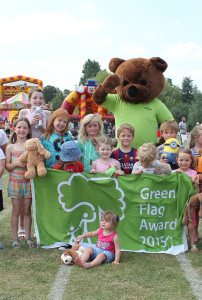 After being awarded its fifth consecutive Green Flag by Keep Britain Tidy in the summer, Lichfield District Council asked everyone to get behind Beacon Park and to vote for it to win the People’s Choice award.

The results are in, and although it didn’t win first place – that honour went to Victoria Park in London – the council is still celebrating after Beacon Park came twelfth out of more than 1,500 parks across the country.

Councillor Andy Smith, Lichfield District Council’s Cabinet Member for Leisure & Parks, said: “We’re all thrilled that Beacon Park has been voted the top park in the Midlands and twelfth in the country. It’s such a special park and we know how much locals and visitors enjoy the gardens, playground, sport facilities, woodland and programme of events. Thank you so much to everyone who voted for Beacon Park.”

The People’s Choice competition is organised by the Green Flag Award scheme, which recognises and rewards the best green spaces in the UK and beyond.