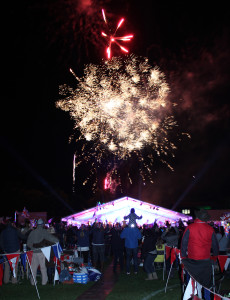 Thousands of people waved their Union flags and sang with gusto at this year’s Lichfield Proms in Beacon Park on Saturday 5 September.

The City of Lichfield Concert Band kicked off the evening’s musical entertainment, playing a selection of popular classics, while the audience found their spaces and set up their picnics.

This led up to the main concert at 7.30pm, which featured The British Police Symphony Orchestra and singers, Claire Prewer, Jane Stevenson, Richard Coxon and Aaron Prewer-Jenkinson.

The conductor, Richard Jenkinson, was joined on stage once again by experienced compere, Danny Mizon. Together they took concert-goers through the main programme, which included music inspired by war, such as fanfares, cavalry marches and Saving Private Ryan and War Horse film scores.

There was also music from the Bond films and Austin Powers, as well as all the proms favourites.

Councillor Andy Smith, Lichfield District Council’s Cabinet Member for Leisure & Parks, said: “Lichfield Proms in the beautiful surroundings of Beacon Park is such a fantastic way to end the summer. The night was wonderful with stirring music, beautiful singing, fireworks and a fantastic crowd that cheered at all the right moments. We were also very lucky with the weather as it was a clear and dry late summer evening.

“Proms is a huge event to stage and I would like to thank everyone who worked so hard to organise it, as well as our sponsors and everyone who made a donation on the night. A big thank you must also go to the City of Lichfield Concert Band, The British Police Symphony Orchestra, the singers and compere, who made it such a memorable evening for us all.”