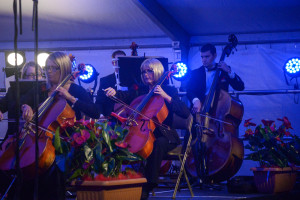 There are plenty of musical treats in store for the audience at this September’s Lichfield Proms in Beacon Park.

The British Police Symphony Orchestra is busy rehearsing, in readiness for this year’s free Lichfield Proms in Beacon Park, on Saturday 5 September.

The 65-piece orchestra will lead the main concert at 7.30pm. The conductor, Richard Jenkinson, will be joined on stage once again by experienced compere, Danny Mizon.

Together they will take concert-goers through the main programme on the night, which includes music inspired by war, including fanfares, cavalry marches and the film scores from Saving Private Ryan and War Horse.

There will also be music from the Bond films and Austin Powers, as well as all the proms favourites.

Richard Jenkinson, Music Director & Conductor of the British Police Symphony Orchestra, said: “Our musical programme has something for everyone with recognisable film scores to classical hits, rounding the evening off with patriotic proms anthems that are sure to get everyone waving their flags.”

Lichfield District Council’s free proms will also feature the three singers, Claire Prewer, Jane Stevenson and Richard Coxon. They will be singing highlights from the opera Turandot, and proms favourites such Rule Britannia and Land of Hope and Glory.

Councillor Andy Smith, Lichfield District Council’s Cabinet Member for Leisure & Parks, said: “With top class music, picnicking under the stars in the beautiful surroundings of Beacon Park, and plenty of community cheer, our seventeenth Lichfield Proms in Beacon Park promises to be a fantastic event for the whole family.”

Lichfield Proms in Beacon Park is on Saturday 5 September. Children’s activities will start from 5.30pm, the City of Lichfield Concert Band will warm up the audience from 6pm and The British Police Symphony Orchestra will take to the stage at 7.30pm to play the main concert.

The Rotary Club of Lichfield St Chad is also proud to be supporting this year’s Lichfield Proms.