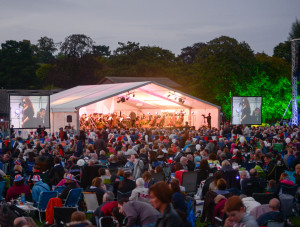 Thousands of people waved their flags and sang with gusto at the sixteenth Lichfield Proms in Beacon Park on Saturday 6 September 2014.

Organised by Lichfield District Council, Lichfield Proms is a huge free celebration of classical and popular music, picnics and fireworks.

Councillor Andy Smith, Lichfield District Council’s Cabinet Member for Leisure & Parks, said: “Everyone came together for a wonderful evening of entertainment in the beautiful surroundings of Beacon Park.

“With talented musicians and singers, fireworks and a fantastic crowd that waved their flags and cheered throughout the concert, it was the perfect way to end the summer.”

The evening’s festivities started at 5.30pm with activities for children, face painting and food and drink stalls. The City of Lichfield Concert Band started off the music from 6pm, playing a selection of popular classics and pop favourites, while the audience found their places and set up their picnics. 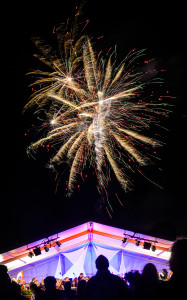 This led to the main concert which featured The British Police Symphony Orchestra and singers, Claire Prewer, Jane Stevenson and Lynne Lindner. This year’s musical programme had something for everyone, including popular classical music, songs from operas, film scores and all the proms anthems.

The concert was compered by the orchestra’s principal percussionist, Danny Mizon, who got everyone into the celebratory spirit.

The evening was brought to a close with a fireworks display to the stirring sounds of Land of Hope and Glory (Pomp & Circumstance No.1).

Andy continued: “Staging an event as large as Lichfield Proms is a massive task, and I would like to thank everyone who worked so hard to make it possible, as well as our sponsors and to all those who made a donation on the night. We’d also like to thank the City of Lichfield Concert Band, The British Police Symphony Orchestra, our superb singers and compere, who made it such a memorable evening for us all.”