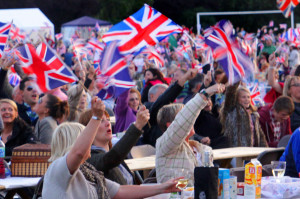 The countdown to this year’s Lichfield Proms in Beacon Park has begun!

The City of Lichfield Concert Band will kick off the musical entertainment from 6pm with a selection of popular classic and modern show tunes.

This will lead up to the main concert at 7.30pm, that will feature The British Police Symphony Orchestra and singers Claire Prewer, Jane Stevenson and Lynne Lindner.

The main concert will be compered by the orchestra’s principal percussionist, Danny Mizon. Danny will take concert-goers through the programme on the night, introducing both traditional and modern classical music and show tunes.

From music from the films E.T. and Star Wars, through to Jupiter from the Planets and all the proms anthems, there is something for everyone.

The night will end with a rousing rendition of Land of Hope and Glory (Pomp & Circumstance No.1) to fireworks overhead.

The late summer event will also feature activities for children, hot food and drink stalls and a proms shop where concert-goers can stock up on their patriotic flags and hats. To make sure everyone can enjoy proms safely, barbeques are not allowed.

Car parking is available in Beacon Park for a £5 donation on the night, which includes a glossy programme. Concert-goers should follow the signs from Lower Sandford Street to the temporary car park.

As well as the kind support of its sponsors, Lichfield Proms in Beacon Park relies on donations from the audience on the night.