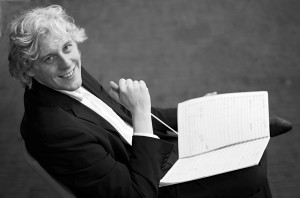 Star Wars, Nimrod and Mars from The Planets will be just some of the musical treats in store for audiences at this September’s Lichfield Proms in Beacon Park.

Lichfield Proms is less than two months away and The British Police Symphony Orchestra (BPSO) is busy practising in readiness for their big performance in Beacon Park on Sunday 6 September 2014.

For more than a quarter of a century, the BPSO has thrilled audiences up and down the country. Conducted by new musical director, Richard Jenkinson, the 65-piece orchestra will lead the main concert at 7.30pm.

Richard Jenkinson, Musical Director of The British Police Symphony Orchestra, said: “Lichfield Proms is one of the highlights of the regional calendar, and we’re delighted to be invited back to lead the main concert.

“We will be playing a varied programme this year, ranging from recognisable film scores to classical hits, rounding the evening off with patriotic proms anthems that are sure to get the audiences waving their flags.

“This is my first Lichfield Proms as musical director of the BPSO, and I am looking forward to meeting the incredibly enthusiastic audience who are so very loyal to the BPSO through floods and sunshine.”

The free family event will also feature music from the City of Lichfield Concert Band that will be warming up the Lichfield Proms audience from 6pm.

The concert band has promised a range of music, including pop favourites by ABBA, Adele and The Beatles, as well as music from hit shows such as Hair Spray, West Side Story and The Sound of Music. Their repertoire is also set to include film scores from Brave, Jurassic Park, James Bond and 633 Squadron, as well as rousing classical music such as Dvorak’s Slavonic Dance, and more.

Councillor Andy Smith, Lichfield District Council’s Cabinet Member for Leisure & Parks, said: “We are delighted to announce the musical programme for Lichfield Proms, and I know my son is especially looking forward to hearing Darth Vader’s theme music in the Star Wars piece! The British Police Symphony Orchestra, along with the City of Lichfield Concert Band, is sure to keep everyone entertained and we can’t wait for what promises to be a fantastic night.”

To find out more about Lichfield Proms in Beacon Park, please visit www.lichfielddc.gov.uk/lichfieldproms