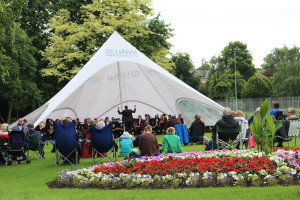 Park goers will have another chance to catch an afternoon concert in the beautiful surroundings of Museum Gardens when the City of Lichfield Concert Band returns to the city park on Saturday 5 July, from 1pm to 3pm.

Hundreds of people enjoyed the sounds of the City of Lichfield Concert Band when they entertained the crowds last Sunday (29 June 2014) in Beacon Park’s Museum Gardens. The band liked playing so much that they are coming back for another concert this Saturday.

The big band will entertain the crowds for free with a range of music, including pop favourites by ABBA, Adele and The Beatles, as well as music from hit shows such as Hair Spray, West Side Story and The Sound of Music.

The two- hour concert is also set to include film scores from Brave, Jurassic Park, James Bond and 633 Squadron, as well as rousing classical music.

Councillor Andy Smith, Lichfield District Council’s Cabinet Member for Leisure & Parks, said: “The City of Lichfield Concert Band enjoyed playing in Museum Gardens so much that they are returning this Saturday. We’ve had fantastic feedback from park goers who gathered in numbers to listen to the music. Once again we’d like to thank Chandlers Café for supporting this event.”

To find out more about Beacon Park, visit www.lichfieldhistoricparks.co.uk