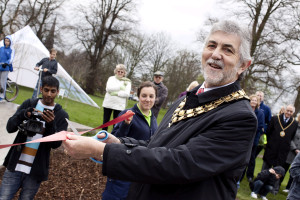 Councillor David Leytham, Chairman of Lichfield District Council, said: “It’s so important that young people have venues available to encourage them to go outside and get active, so it gave me great pleasure to launch Beacon Park’s fantastic new skatepark. I am sure it will be enjoyed by generations of skaters for many years to come, and I hope everyone takes pride in it and helps us to keep it a pleasant place for all.”

Following the ribbon cutting, the crowd was treated to skating display by Gravity pro skaters.

Councillor Andy Smith, Lichfield District Council’s Cabinet Member for Leisure & Parks, commented: “The skating was amazing and really showed what can be achieved on the ramps, after plenty of practice! Well done to the skaters and, on behalf of the council, we thank everyone who has helped to fund the skatepark and supported the project.” 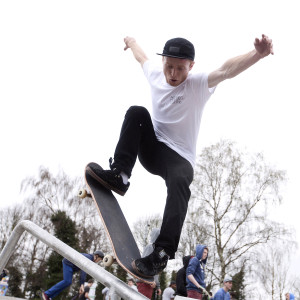 Paul Taylor, Executive Director of The Veolia Environmental Trust, said: “Over the last five years we have awarded £486,546 through the Landfill Communities Fund to community and environmental projects in Staffordshire, and it is always great to hear about the opening of one we have supported. This facility will bring a range of health and social benefits to the community of Lichfield and I hope it is used and enjoyed for many years to come.”

The skatepark is regularly inspected, but if anyone has any concerns, they can contact the council’s parks team on 01543 308867 or email parks@lichfielddc.gov.uk