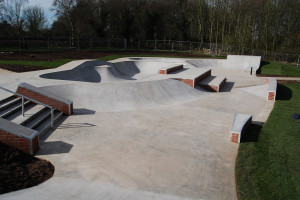 Following the completion of the first phase of the project, Lichfield District Council has opened Beacon Park’s skatepark, which can now be used by skaters.

The second phase of the project got underway in February, which includes landscaping the area with grass, trees and plants. This will continue throughout March.

Councillor Andrew Smith, Lichfield District Council’s Cabinet Member for Leisure & Parks, said: “We’re still putting the finishing touches to the skatepark but know that skaters are itching to use the facility so we’ve opened it up to them earlier than planned, while we complete the landscaping. We hope everyone enjoys using it, but we would ask everyone to keep to the paths when getting to and from the skatepark, to give the grass a good start.”

The ribbon will be cut to mark the official opening of Beacon Park’s Skatepark on Saturday 5 April 2014 from 12 noon. This will be followed by a showcase of skateboarding by pro-skaters. Everyone is welcome to come to the opening to enjoy the skating.

“We’re all looking forward to formally launching the new skatepark in April which will be a chance to once again thank all the organisations that have helped to make this facility a reality.”

The skatepark are will be regularly inspected, but if anyone has any concerns, they can contact the council’s parks team on 01543 308867 or email parks@lichfielddc.gov.uk

• Skate at your own risk
• Opening times are from dawn to dusk
• Wearing helmets and safety pads is strongly recommended
• Please keep the skatepark tidy
• Skateboards, BMX bikes, scooters and skates only
• No alcohol, glass, food or drink on the skate area
• Children should be supervised by an adult
• No animals in the skate area
• Show consideration to other skaters and park users