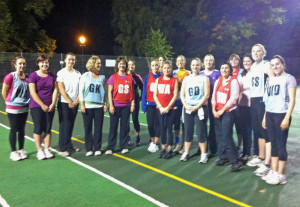 Lots of women have braved the autumn nights and joined in Back to Netball training in Beacon Park.

The training, running Thursdays from 7pm to 8pm on Beacon Park’s tennis courts, has proved really popular with an average of 30 women a week joining in.

The sessions offer a gentle re-introduction to the game for all women over 16 years of age and are led by qualified coaches.

Sarah Sleigh, Sports Development Officer, said: “The netball training is proving really popular with women of all ages enjoying rediscovering the sport and playing as a team.”

Due to popular demand, the Back to Netball sessions have been extended and will run until 21 November, with a break for autumn half term (31 October).

“If you haven’t come along yet, but are keen to learn some basic skills, including passing and footwork, as well as playing a fun match, join us on Thursday evenings,” continued Sarah.

Funding to offer the free places for 16 to 24 year-olds has been provided by Sport England’s Sportivate initiative.