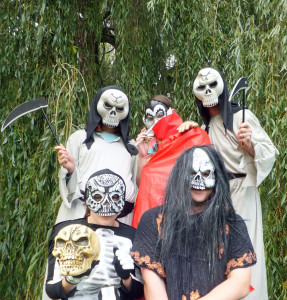 In 2014, to commemorate 100 years since the outbreak of World War One, Lichfield District Council, in partnership with the Friends of Lichfield Historic Parks, is planning to create a field of poppies in Beacon Park, just beyond the golf course.

To raise the funds needed to buy the seeds and prepare the ground, the council’s parks team is holding a sponsored fancy dress day on Wednesday 30 October 2013.

On the day the team is hoping to raise money by dressing up as various Halloween characters, including vampires, skeletons and witches.

Councillor Val Richards, Lichfield District Council’s Cabinet Member for Leisure, Communications & Tourism, said: “Visitors to Beacon Park have been really enthusiastic about turning a small area of open space to the north west of Beacon Park into a wildflower meadow.

“We plan to create a field of poppies in 2014 to commemorate 100 years since the outbreak of the First World War, and then replace the poppies with a cornflower mix in 2015.

“Wildflower meadows not only look beautiful, they are also great for attracting wildlife and require less maintenance than grass. We hope people will help us to create the field of red by donating what they can.”

To make a donation to create a field of poppies in Beacon Park, please pop some money into the collection bucket at the Ranger Station (which is the kiosk next to the crazy golf course).