The visit, to celebrate the city park’s recent transformation as part of Lichfield Historic Parks Project, started at Museum Gardens.

This led on to the rededication of a newly conserved statue of The Princess Royal’s great great grandfather, King Edward VII. Princess Anne unveiled a new engraving on the statue’s plinth to mark the occasion. The engraving reads: ‘This statue was rededicated by HRH The Princess Royal on a visit to Beacon Park, 24 April 2013’.

The tour, led by Lichfield District Council, passed by the park’s historic monuments, including Chancellor Law’s Fountain, the statue of Commander Edward Smith – Captain of RMS Titanic, and the Swinfen Broun memorial. The Princess Royal also saw the recently unveiled statue of Erasmus Darwin and met the sculptor, Peter Walker.

This was followed by a visit to the new community gardening facility, where The Princess met children, teachers and volunteers from Saxon Hill Community School and Changes – two of the groups that use the facility to learn about gardening, self-sufficiency and wildlife.

The party carried on past the children’s play area and Beacon Park’s pool, and then on towards the playing fields where Princess Anne saw young people competing in the Community Games – an event to showcase local school children’s sporting talents.

The Princess Royal then met a selection of specially invited guests who assembled in a marquee, including councillors and officers from Lichfield District and Lichfield City councils, as well as representatives from the skilled team that worked on the restoration of the park’s original features, and the main funders of Lichfield Historic Parks project – the Heritage Lottery Fund and the Big Lottery Fund.

On the visit, Princess Anne also had a chance to see 14 Olympic inspired flags displayed by local school pupils. These were created last year by schools across the district, and formed part of a parade through the park on the day the Olympic Torch Relay passed through the city in June 2012. 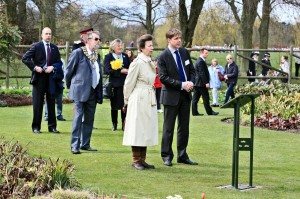 The tour then continued through the park’s Herbaceous Garden, where The Princess Royal found out more about the origins of Martyrs’ Plaque – a conserved sculpture of the city’s historic common seal. She also had the chance to see bowls being played on Crown Bowling Green.

After a quick stop for lunch, provided by Chandlers Lakeside Bistro who catered the event, The Princess Royal was presented with a posy of flowers by local Chadsmead Primary Academy pupils, Sophie Turner (age 10) and Emily Turner (age 8), before the end of her visit.

Councillor Val Richards, Lichfield District Council’s Cabinet Member for Leisure Services, said: “We were all so proud to welcome HRH The Princess Royal to Beacon Park, and it was a privilege to be a part of the event and to be introduced to her. Princess Anne was interested to hear about the recent conservation and improvement works as part of Lichfield Historic Parks project. She was very complimentary of Beacon Park and I’m delighted that the weather was fine for the visit and that the park looked at its very best on this important day.”

In preparation for the official visit, teams across the council worked hard to make sure Beacon Park was ready to welcome royalty.

This included creating floral displays in the flowerbeds and laying turf to improve the lawns, installing new railings and a yew hedge along the Swan Road side of Museum Gardens, cladding the base of the Erasmus Darwin statue, installing an interpretation board to explain the origins of Martyrs’ Plaque, and launching an accessible roundabout and extra swings in the Junior Play Area.

Beacon Park remained open to the public throughout the royal visit and hundreds of people came to cheer on HRH The Princess Royal and to wave their Union flags.