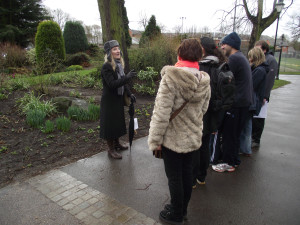 The one-day art trail, which included 18 installations, took walking and shoes as its theme. It was a chance to see much of the artwork created by nearly 600 shoppers at two workshops that took place in a shop in Three Spires Shopping Centre in February.

The trail also featured a series of art installations by Untitled Art Collective and other artists, including golden shoes hanging in a tree, a ball of wire and shoes, animation stills of a running man and a walking boot, a viewing chair, shoes made out of bread, and many more.

Despite the rainy start, people of all ages collected a map from Beacon Park’s Discovery Hub and followed the trail.

More than 50 people, some of whom were joined by their pet dogs, also took the opportunity to go on one of three free guided walks led by local storyteller, Maria Whatton, who told stories inspired by the artwork along the way.

Celia Houghton, Art Development Officer for Lichfield District Council, said: “We’re really pleased that, despite the wet start to the day, around 800 people came to Beacon Park and followed The Lichfield Shoes: Walk This Way Art Trail. We’ve had some great feedback from visitors who went on the trail and told us how much they enjoyed it.”