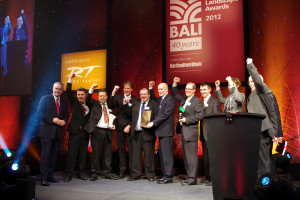 On top of winning the Principal Award, the British Association of Landscape Industries chose Lichfield Historic Parks project as the winner of the coveted Grand Award at their awards ceremony this December

The project scooped the Principal Award for the Restoration and Regeneration category, and then went on to win the Grand Award at an awards ceremony, held at Grosvenor House in London on Friday 7 December 2012.

Held annually to recognise excellence in landscape design, construction and maintenance by members of the British Association of Landscape Industries, this year’s awards were hosted by BBC presenter and newsreader Huw Edwards.

Of Lichfield Historic Parks project, the judges commented: “This extensive historic park refurbishment project formed an integral part of Lichfield District Council’s Strategic Plan and required the skills of a specialist in the field of historic landscape restoration.

“P Casey (Land Reclamation) Ltd has dealt sensitively in restoring elements of the historic parks and open spaces running through the heart of the cathedral city.”

Casey Operations Director, Mike Cafferky, said “It was a huge privilege to be granted the BALI Grand Award and Principal Award for Lichfield Historic Parks project. We are very proud of the works we carried out on the parks and consider it one of our finest flagship projects in our work history portfolio. We are pleased to have been associated with Lichfield District Council and equally appreciative of the judges’ comments and awards which BALI has bestowed upon us.”

The Grand Award is presented to the overall winner of all the categories in the awards.

“To go up against the winners of all the categories in the National Landscape Awards, and to win the overall Grand Award, is a testament to the quality of the project.

“There was strong competition from impressive projects, such as The Queen Elizabeth Olympic Park, London’s Central Square, Glasgow’s Riverside Museum, and many more, so it is just brilliant that the judges were so impressed with Lichfield Historic Parks project.”

To find out more about all the BALI award-winners, visit http://www.bali.org.uk/awards/winners_2012